On Tour with Prism Book Tours

The strange planet Kennedy has called home for the last year transformed her into something more powerful than she ever imagined.

But itâ€™s not home.

And most importantly, it doesnâ€™t have Phoenix.

Faced with life-altering decisions, Kennedy is forced to abandon everything she built for an uncertain future. The journey wonâ€™t be easy, but sheâ€™s survived greater odds. If it means reclaiming the life she lost, sheâ€™ll do whatever it takes. Even if it means letting go of something she never expected to want.

It lit the ground, soaring straight toward her. She scrambled to her feet, her heart thudding against her chest. It was coming fastâ€”faster than she could run.

A thunderous voice boomed from behind. â€œASSASSIN WITCH! You dare come into this camp!â€

She jumped, using the water in her own body to propel her faster, trying to put some distance between her and that blasted fire. It didnâ€™t work. She couldnâ€™t gain much ground, and whoever was after her was coming way too fast. The scalding heat was at her heels, blazing across her back. Sweat poured from her body. She cried out from the pain. God, it felt like she was melting.

The ground shook, and she tripped. As she fell, time slowed.

Instinctively, Kennedy did the only thing she could do. She stretched her mind, reaching into the stream. Water rushed around her, enveloping her body inside of a cube. Four walls, four sides. Within seconds, she froze each of those sides, creating her own little box of ice. It was airtightâ€”she wouldnâ€™t last long in here without oxygen, but hopefully long enough for the fire to subside.

The ground continued to shake from the force of the explosion. Those bright orange flames danced around her, frosting the surface of her cube and blocking everything in sight.

Kennedy curled her knees to her chest, focusing on keeping the water frozen. It took every ounce of energy she had to keep the ice from melting, to keep herself protected.

Between the flames, she saw someone coming. The fire died down, and then they were right upon her, a pair of lethal black eyes peering into her icy sanctuary. It was hard to focus. The fumes had made her dizzy. Little by little, the rest of the face came into view.

She blinked several times, trying to still her wildly beating heart. A blur of hard angles, unkempt blonde hair, and muscles. The body was slightly different, a little bigger. But she would know that face anywhere.

She must be dreaming. Had she died in that explosion back there? She blinked once. Twice. Then pinched herself for good measure.

He stood on the other side of the ice, looking downright murderous as he glared at her. Holy bejeesusâ€”he was the one trying to kill her!

â€œYour time is up, witch!â€ he said, his voice slightly muted.

Kennedy scrambled toward him, pressing her palms against the ice. â€œPhoenix, itâ€™s me!â€ she said, wiping away the frost so he could see her better. But there was no recognition in his eyes. He didnâ€™t even flinch.

It was too late anyway. Another explosion sent her cube tumbling. She slipped on the melting floor and lost her balance. Her head struck against the wall, and ice shattered around her like shards of glass.

Stars. All she could see were stars, and then nothing.

Other Books in the Series

(Linked to Amazon affiliate links.)
About the Author

I don’t consider myself a writer. I’m a storyteller. I live in Orlando, FL with my family. Keep up with me on social media. I love hearing from readers!

Open internationally (as long as winner is eligible to receive prizes)
Ends December 16, 2019 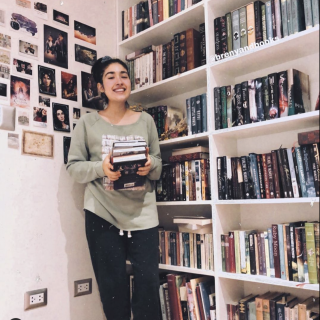